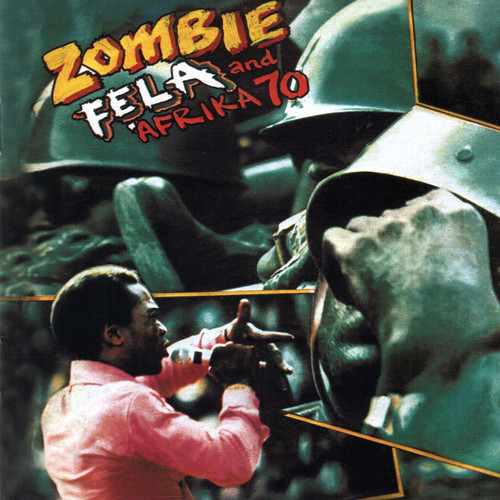 180 gram vinyl LP pressing. On the title track of 1976's Zombie, Fela and the backup singers ridicule the mindset of men in uniform over an urgent, quick-march accompaniment from Afrika 70. "Attention! Quick march! Slow march! Salute!" sings Fela, "Fall in! Fall out! Fall down! Go and kill! Go and die! Go and quench!" Each phrase is followed by the women singers' taunting response, "Zombie!" Just a few months later on 18 February, 1977, around 1,000 soldiers, most of them armed, swooped on the Kalakuta Republic. Fela was badly beaten, sustaining a fractured skull and several broken bones. His mother, then aged 77, was thrown out of a window, fracturing a leg and suffering deep trauma. The army then set fire to the compound and prevented the fire brigade reaching the area. The blaze gutted the premises, destroying six Afrika 70 vehicles, all Fela's master tapes and band equipment, a four-track recording studio, all the residents' belongings and, for good measure, the free medical clinic run by Fela's brother, Dr Beko Ransome Kuti (who was also severely beaten in the attack). The first journalists to arrive on the scene were assaulted by soldiers. Inquisitive passers-by were similarly set upon. The army didn't want any witnesses.
back to top