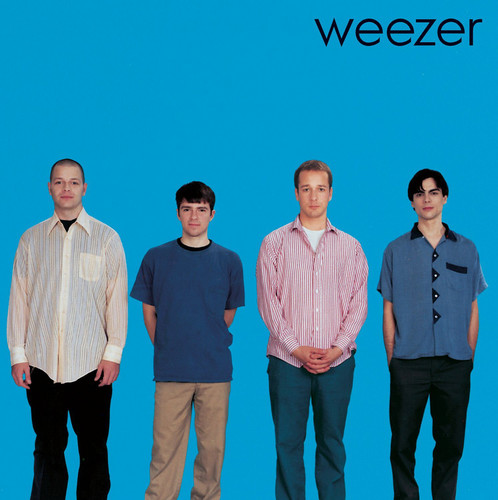 Weezer, with its simple blue cover featuring a group band shot, was not like anything most kids in 1994 had heard before, taking its nerdy cues from strange places the 1950s, comic books, Dungeons & Dragons, the Bible and producer Ric Ocasek, pop auteur of The Cars. Initially released without a single or much notice, the album's sales started slow but eventually reached triple platinum status, spending 78 weeks on the chart and peaking at No. 16 on the Billboard 200 albums chart. It has sold 3.7 million copies in the U.S alone. Local radio play for 'Undone The Sweater Song' prompted an official release and video directed by then rising star Spike Jonze. The video featured the band performing on a soundstage, joined by a wandering pack of dogs. Their next Jonze-directed innovative video for 'Buddy Holly' helped spike the band s popularity and won four MTV video awards. The song rose to No. 2 on Billboard s US Modern Rock chart, one of three top 10 hits for Weezer. The album's esteem has only continued to rise in the decades since its release and its impact has been magnified. Rolling Stone placed the Blue album in both its lists of top 500 albums (No. 297) and top 100 debut albums, where it was No. 35: 'When it came out, Weezer's debut was merely a cool, quirky power-pop album with a couple of hit singles: 'Buddy Holly' and 'Undone (The Sweater Song).' But Rivers Cuomo's band became a major influence to the young sad-sack punkers who today claim Weezer as one of emo's pioneers. Mixing winking deadpan delivery with serious hooks, guarded sensitivity and a deep disinterest in alt-rock's then-roiling culture wars, they came up with a record that's aged much better than a lot of the serious indie-rock of the time.'
back to top