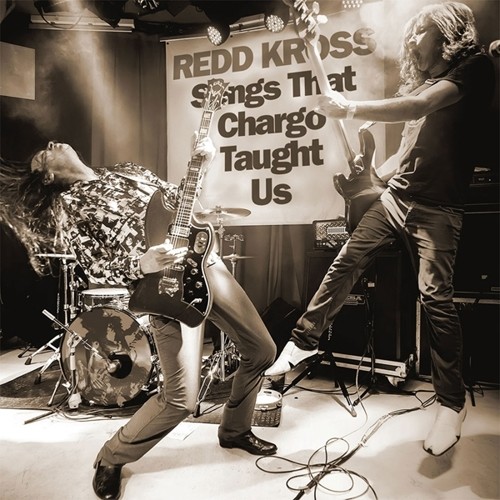 "Two generations of defiantly insolent rock & rollers collide together with smashing results on a slyly titled split 7-inch, Songs That Chargo Taught Us, an homage to Charlotte Caffey (The Eyes, The Go Go's). "In this corner, the rising young Southern California contenders, The Side Eyes, belt out their amped-up version of "Don't Talk to Me," a sordid classic by Caffey's prescient late'70s punk trio with D.J. Bonebrake (X, the Knitters) and Joe Ramirez (Black Randy & the Metro Squad) the Eyes. "In the other corner, longtime champions of power-pop supremacy and glam-punk anarchy, Redd Kross unexpectedly transmogrify of "Screaming," an early obscurity by the Go-Go's. "As Iggy Pop would say, Side Eyes lead singer Astrid McDonald has a right to sing a proto-riot-grrl anthem like "Don't Talk to Me," with it's lurid lyrics that sound like a pulp-novel heroine's sullen reply to an unseen kidnapper. The daughter of Charlotte Caffey and Redd Kross' Jeff McDonald, the 21-year-old front woman already has a preternatural presence as she stalks back and forth onstage and belts out her vocals with charismatic assurance and melodic ferocity. Astrid's head-banging bandmates - rampaging guitarist Kevin Devine and ominously rumbling bassist Chris Devine - give "Don't Talk to Me" a bit of a thundering hard-rock makeover, thrashing out the riffs in convulsive waves of volume and power, even as drummer Nick Arnold maintains the original's throttling punk pace.