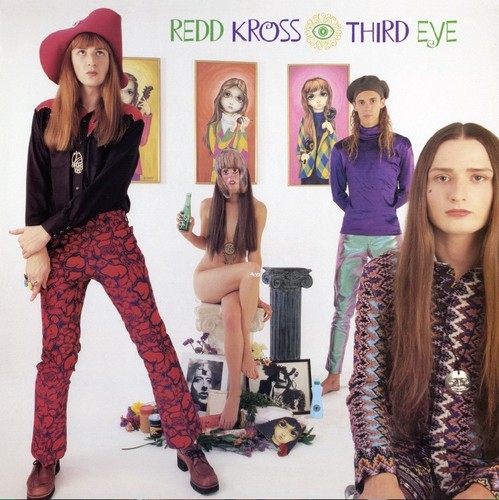 Vinyl LP repressing of this classic album by the garage popsters. The career path of Redd Kross has been a long and winding one... Starting out as part of the burgeoning Los Angeles South Bay punk scene in the late 1970's. Kids hanging out at the legendary Church in Hermosa Beach that served as the headquarters of Black Flag, along with the living quarters of some of its members. Brothers Steven and Jeff McDonald joined by future Circle Jerks guitarist, Greg Hetson and future Black Flag vocalist, Ron Reyes. Members came and went, the nucleus of the band, the McDonald brothers always at the helm though guiding the band from its early roots as a thrashy punk Rock Band through to the metamorphosis of power pop titans. Third Eye was their debut major label release on Atlantic Records, their third long player over all, featuring the hit singles that should have been, "Annie's Gone" and "1976". Third Eye was jam packed with catchy hooks, slick production and memorable tunes. Sadly, it was the only album on Atlantic Records. Released originally in 1990 in the golden period of the major label's deciding that "vinyl was dead", and compact discs were the future (remember them?) Third Eye was only briefly available on vinyl in the U.S and saw extremely limited released on vinyl in Europe. Subsequently Third Eye has become increasingly hard to find on vinyl- that's now been corrected!